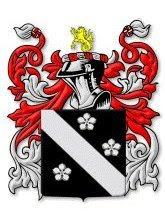 Potter coat of arms (I found this picture through Google picture search)
In the sixth book, The Half-Blood Prince, the surname Peverell is mentioned in connection with a ring that belonged to Tom Riddle's=Lord Voldemort's mother's family (i.e. the Wizard side of his family). His mother's family name was Gaunt, but the ring (which Voldemort turns into a Horcrux) bears the Peverell family crest. (Or so they believe.)

We find out about this in a Pensieve scene, from the memory of a Ministry of Magic representative who once paid a visit to Marvolo Gaunt, Lord Voldemort's grandfather. Marvolo shows him an "ugly, blackstoned ring he was wearing on his middle finger", and says:

'See this? See this? Know what it is? Know where it came from? Centuries it's been in our family, that's how far back we go, and pure-blood all the way! Know how much I've been offered for this, with the Peverell coat of arms engraved on the stone?' (HBP10)

I went a bit further and looked up a lot of other surnames as well, which led to the discovery that actually most of the surnames that J.K. Rowling uses in the Harry Potter Books are very old names, with their own family crests and coats of arms (link to Wikipedia article about coats of arms in general), and Peverell is far from the only name that goes back to the Domesday Book or even further.

An interesting webpage if you want to look further into the history of surnames, coats of arms and family crests is House of Names. Unfortunately, one cannot copy images from their page. But using their search engine, you will find for example that…

The name Potter was brought to England by the Normans in 1066. The crest on their coat of arms is a wyvern, a sort of dragon.

The name Evans (Harry's mother's maiden name) goes back to the ancient Celts. The crest on their coat of arms is a stag. Remember that Harry's father took the form of a stag as animagus, and that the stag is also Harry's patronus.

Interestingly, the crest on the Snape coat of arms is also a stag's head. In the last book, we learn that Snape's patronus is a doe, because of his feelings for Lily Evans.

Snape's mother's maiden name was Prince; this name goes back to Anglo-Saxon times, and on the shield there is a cross of ermine (white with black spots), which is associated with crusaders.

Granger, Hermione's surname, is also an old one, and the family crest is a portcullis, associated with castles and a symbol of protection.

The name Weasley is of Norman origin and arrived in England with the conquest in 1066. Their crest is a wyvern, their motto is "God is Love", and on their shield there are three sea shells. (In the seventh book, Bill and Fleur Weasley live in Shell Cottage.)

The motto over the Riddle coat of arms is "I hope to share". Too good to be a coincidence, I think, since Tom Riddle=Lord Voldemort split his soul into several "shares"…

The Dumbledore coat of arms has a red shield with two golden lions, and a bend of ermine across it. (The bend signifies defense or protection.)

On the Black coat of arms shield, there are three stars. Sirius is the name of a star, and in Rowling's Black family tree, there are several other "star" first names as well.
Posted by DawnTreader at 20:19

I hate to say I've never read Harry Potter. I.m not into fantasy. But you certainly make it sound intriguing. Thanks for being a Follower!

And this is exactly why I love Harry Potter - there is such a richness about each detail!

This type of history always gets my blood flowing, and makes me want to read more more more!

Jen - what fun to get a comment from another Harry Potter fan! I've been neglecting this blog for a while because I have had so many other things to do. I still have a lot of old HP notes on my hard drive that I intended to revise and add here.

Hi, I'm Sophie and also a v. devoted Potter fan. this is a great blog, could you pls have a look at my first post at avpotter.blogspot.com and follow?
Would love it!

If you have not read all seven Harry Potter books - enter this blog at your own risk.

DawnTreader
PLEASE NOTE that this blog is no longer being updated, and comments are therefore closed. 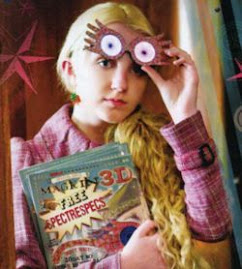 Spectrespecs is my signature at the Harry Potter forum The Leaky Lounge.

As Potter fans know, Luna Lovegood wears a pair of spectrespecs while reading the magazine The Quibbler (in Harry Potter and The Half-Blood Prince).

One aim in this blog is to go back in time and collect some of my Harry Potter "research" and speculations from between the 6th and 7th books, and take a new look at them from the perspective of now knowing how the story ended.

I suspect this will probably be a slow process, in some respects more like cooking a polyjuice potion than using a time turner; adding more ingredients by and by.

I also hope the blog will serve to make others curious to discover more of the symbolism and references that can be found "under the surface" in these books.

You Can Also Find Me Here:

This is the order in which to read the books, and abbreviations of the titles commonly used:

To Seize or to Receive Power: The Horcruxes in the Light of Regalia and Arthurian Legend, by Spectrespecs. Published in the online magazine Scribbulus, issue 2, April 2006. 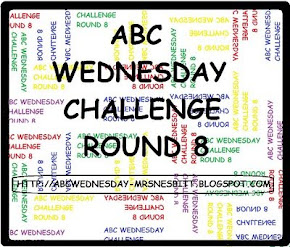